The antennal lamellae are found at the end of the antennae. They have chemosensory capacities and are used by the beetles to locate food and conspecifics for reproduction. 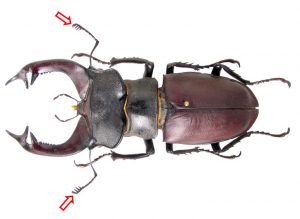 The impressive mandibles or jaws of the males are a weird creation of evolution as they are used to impress and fight with male competitors. Sometimes they even scare away predators such as woodpeckers and owls. 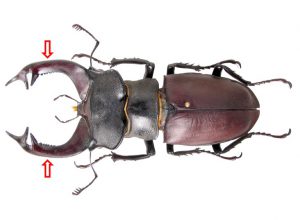 Pronotal side and posterior angle

The pronotal side is the edge of the middle part (pronotum) of the beetle. The posterior part of this edge can be rather straight or more or less sinuate depending on the species. The posterior angles are found at both sides of this posterior pronotal side. These parts are important diagnostic, especially when distinguishing females.

Dorsal view of the pronotum of different species